Project Title: Supporting victims of trafficking for sexual exploitation through improving the services provided by the rehabilitation centre Atoll and shelter Vega.

This project aims to support female victims of trafficking for sexual exploitation. Estonia is currently country of origin for human trafficking, but also transit country and to a very small extent, destination country. Most victims are women who are exploited in prostitution whether in Estonia or abroad. NGO Eluliin, the only organisation providing such thorough and diverse services for sexually exploited women in Estonia follows the same principle and works with all the women in prostitution, at the same time identifying and supporting trafficking victims

When it comes to victims, the situation of women trafficked for sexual exploitation is serious and demands high-quality services and full attention.
Non-governmental organisation Eluliin has operated rehabilitation centre for prostituted and trafficked women since 2005, and it is the only organisation in Estonia providing such thorough and diverse rehabilitation services for female victims of trafficking for sexual exploitation in Estonia (including primary care, social, psychological and legal counselling, shelter service, support personnel, rehabilitation program and post-rehabilitation care).

Eluliin opened psychosocial rehabilitation centre ATOLL and special shelter "Vega", both located in Tallinn. Today Atoll Centre offers a wide range of services to target group, beginning from an outreach work and to comprehensive rehabilitation and post-rehabilitation services to women who are already victims of human trafficking for sexual exploitation, and women at risk (that means women involved in prostitution).
Eluliin has provided support and rehabilitation services for female victims of sexual exploitation since 2005 and additional, new services are needed in Estonia to guarantee more efficient victim support. Rehabilitation services for trafficking victims are extremely important for saving victims from their exploitative environment and preventing re-victimisation. The psychological trauma involved in victimisation in the first place is so immense that it often takes years to recover. Not only victims are affected by the crime and exploitation but also their family members, especially children. Therefore it is important to develop flexible, tailored and wide-ranged support services for victims, but also to help their children to recover from the happening.

The project provides innovative services created and tested in the framework of this project (such as child-mother group and self-help group for former victims of trafficking).

What comes to trainings, people working at Eluliin need to be constantly trained. Therefore, close cooperation with Norwegian experts is needed, and trainings and lectures from Norwegian specialists working on fields such as trafficking in human beings for sexual exploitation, prostitution, violence against women, child support etc. When the project starts, contacts will be renewed with Norwegian NGOS and government officials, to guarantee the best knowledge exchange possible.

In order to develop rehabilitation services, research is needed on victims' needs. Therefore it is important to know the situation better. Also, as it is very difficult to leave the trafficking environment due to several reasons such as fear, intimidation, hopelessness, lack of support networks etc, the study conducted in the project will also analyse the motivational factors victims may have to escape trafficking environment. Report prepared after the research will help also officials from relevant ministries and organisations working on prevention and general victim support issues to understand better the needs of victims and support them in changing their lives.

Another relevant study taking place in the framework of this project is the study on how to evaluate moral damage and how to assess compensation for trafficking victims. Compensation issues are highly relevant in EU level. The European Convention on Compensation of Victims of Violent Crime in article 2 states that when compensation is not fully available from other sources the State shall contribute to compensate those who have sustained serious bodily injury or impairment of health directly attributable to an intentional crime of violence, and the dependants of persons who have died as a result of such crime.

To give input for policy development in Estonian regarding preventing and combating trafficking in human beings, the project prepares reports on best practices learnt and research made, and presents them to relevant stakeholders. This ensures the knowledge exchange and best usage of the information gained during the project.

The project's objective is to develop broad-based support for women victims of trafficking for sexual exploitation.

Expected outcomes of this project: 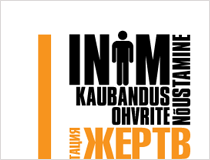